A rainbow is a long ribbon of colors that are bent like an arc, which is formed by reflection and refraction of the sun’s rays inside raindrops.

Rainbows are even more fascinating than first meets the eye so let’s take a closer look.

Red and orange and yellow and green…

The main colors in a rainbow are Red, Orange, Yellow, Green, Blue, Indigo and Violet.

This is normally memorized by mnemonics for example “Roy G. Biv” – each letter represents the first letter of the main seven colors of the rainbow.

These seven colors in the rainbow are just the main ones, a rainbow is actually made up of an entire range of colors, any color you’ve ever seen, even colors you haven’t seen!

Nobody sees colors the same, everyone’s eyes react differently depending on how much light there is, so some people may see more colors than what you see.

It was Sir Isaac Newton who discovered that sunlight falling upon a prism could split into its component colors.

Most of these are easy to distinguish except for indigo.

Legend has it that Newton included indigo because he felt that there should be seven rather than six colors in a rainbow due to his strong religious beliefs.

Iris was the Greek goddess of the Rainbow.

Somewhere over the rainbow – someone views it differently.

When you look at a rainbow you are actually looking at the light being bounced of certain raindrops.

The person next to you is looking at the rainbow from a totally different angle and different raindrops are being reflected, which makes each person’s view of a rainbow completely unique.

A rainbow appears after it has rained; the sun is always behind you and the rain in front of you when a rainbow appears, so that the center of the rainbow’s arc is directly opposite the sun.

It doesn’t have to rain for us to see a rainbow however, rainbows can be seen in the early morning dew, in the mist from a waterfall or in the spray of water from the ocean!

An old European belief is that anyone passing underneath a rainbow would be changed from a man into a woman or woman into man!

The idea that a pot of gold can be found at the rainbow’s end originated in old Europe. In a place called Silesia it was said that the angels put the gold there and that only a nude man could obtain the prize.

Unfortunately, scientists say this is impossible to do, but believe who you want to believe!

Rainbows are the universal symbol of peace and harmony.

A little hearsay of my own.

When I was younger, one of my school teachers told me she drove through the end of the rainbow, she said there was no pot of gold there but it was rather beautiful.

She obviously forgot to mention it was just a dream because you can never actually reach the end of a rainbow, as you move, the rainbow that your eyes see also moves.

This is because the raindrops are at different places in the air this means that any rainbow you try to get to, as close as it may seem, it will always be the same distance away as it was before you started to travel closer to it.

Did you know you can see rainbows at night? 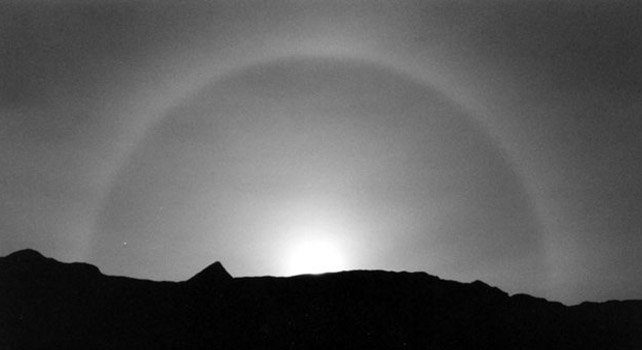 Moonlight can produce enough light to create a rainbow at night.

“This is a lunar rainbow or ‘moonbow’. Moonbows are rare because moonlight is not very bright. A bright moon near to full is needed, it must be raining opposite the moon, the sky must be dark and the moon must be less than 42º high.”

“Put all these together and you do not get to see a moonbow very often! To the unaided eye they usually appear without color because their light is not bright enough to activate the cone color receptors in our eyes.”

“Nonetheless colors have been reported and might be seen when the moon is bright.”

When you see a rainbow from the ground, you see an arc of colors, although when viewed from a plane it is possible to see an entire circle as you can look down on raindrops!

Rainbow was a children’s TV show back in the early 90’s, some of you may remember the show, or at least characters from the show, Zippy being the most favorite! I think it was just a British show though.

A rainbow in Taiwan was visible for a record-breaking 8 hours and 58 minutes on November 30, 2017. The rainbow arched over northern Taiwan for nearly nine hours, making it the longest-lasting rainbow on record.

So there you have it, rainbows are far more interesting than I originally thought.

I know I for one will appreciate rainbows even more than before when I see them in the future.