Zebras are one of the many beautiful creatures inhabiting eastern and southe­rn Africa. So we simply couldn’t resist writing these zebra facts.

They’re easily one of the most recognizable members of the horse family due to their iconic black and white stripes. But there’s so much more to learn about the common zebra than just their black stripes… or is it white stripes?

Here we’ll look at the main species of zebra, including what makes them a mammal not to be messed with!

Here are 39 fun facts that you should know about zebras.

Zebras are herbivores, which means they eat plants, grasses, and roots.

There are three different species of zebra that can be found in East and South Africa. The plains zebra, Grevy’s zebra, which is also known as the Imperial Zebra, and the mountain zebra.

Zebras belong to the Equidae family, which is sometimes known as the horse family. The animals within this group are horses, donkeys, and zebras.

Each zebra species has its own general stripe pattern, and more impressively, each zebra has a unique stripe pattern. This makes zebra stripes as unique as snowflakes or human fingerprints.

The plains zebra has broader stripes than the other two species. The mountain zebra normally has vertical stripes on its neck and torso, while horizontal stripes cover its legs. Grévy’s zebras are usually taller, have larger ears, and their stripes are narrower.

Their coats’ black & white striped pattern is a good bug repellant, keeping horseflies and other blood-suckers at bay. Scientists also believe that their stripes act as sunscreen or camouflage.

While black and white may not seem like a particularly good option for camouflage, most of the zebras’ predators, such as lions, are colorblind. So zebras bunch together to confuse colorblind predators, which mistake the striped pattern as grass.

Zebras have excellent eyesight and are one of the few mammals that can see in color. However, zebras cannot see the color orange.

Zebras are social animals and can often be found in large groups. The collective name for a group of zebras has various words; it’s sometimes known as a dazzle of zebras, a zeal of zebras, or simply a herd of zebras.

Zebra herds vary in size, usually with 5 to 20 families traveling together. This can be as large as 1,000 individual zebras. When traveling, zebras often form hierarchies with a dominant stallion in the lead, followed by the mares and their foals.

When a mother zebra gives birth, she will usually keep her foal away from all other zebras for two or three days until the foal can recognize her scent, voice, and appearance.

When faced by predators, zebras will form a semi-circle and bite, nip or kick the predators if they come close to them. They will also encircle an injured family member to protect it from further attack if the need arises.

Zebras have an extremely powerful kick. They’re able to kick with nearly 3,000 pounds of force, which is strong enough to kill a fully grown lion, which just a single blow to the body.

Zebras have excellent hearing. The position of their ears allows them to hear in almost any direction; use this ability is used to communicate their mood with other zebras.

Other than using their ears, zebras communicate with facial expressions and sounds. For example, they often make loud braying or barking sounds and soft snorting sounds. Their ear position, how wide their eyes are open, and whether they show their teeth are all signals of zebras communicating.

The Grévy’s zebra is named after Jules Grévy, the president of France in 1882, who received a zebra as a gift from the emperor of Abyssinia. Grevy’s zebras are mostly found in East Africa, specifically in northern Kenya and Ethiopia.

Unfortunately, the Grevy’s zebra is considered to be an endangered species.

The Swahili name for the zebra is “Punda Milia.”

The Native American culture refers to zebras as a symbol of balance and sureness of path.

The zebra is actually mostly covered in white and striped with black or dark brown stripes, but underneath their white coats is black skin.

Zebras run in a zig-zag pattern when chased by predators to make it more difficult for predators to catch them.

In Roman Circuses, the zebra was usually called a “Tiger-Horse” or a “Horse-Tiger.” The circuses used Grévy’s zebras to pull the carts.

In general, zebras are pretty short and range from 3.6 to 5 feet tall (1.1-1.5 meters). The largest is the Grevy’s zebras, while the shortest is the plains zebra.

A zebra can run up to 40 miles per hour (65 km/h), which is pretty incredible considering they only have one toe on each foot.

Zebras are constantly moving, looking for delicious fresh green grass to eat and water to drink.

Wild zebras can actually survive a long time without water. They’re able to survive by only drinking water once every five days.

They’re impressive climbers too! Mountain zebras live in rugged terrain, and often to find their food, they have to climb. Luckily for them, their pointed hoovers allow them to climb mountains easily.

To sleep, generally, zebras don’t lie down – instead, they usually sleep standing up.

The plains zebra appears on the coat of arms of Botswana. The two zebras symbolize the importance of wildlife throughout the country.

Like horses and humans, zebras cool down by sweating.

Zebras can be found in various protected areas, including Yabelo Wildlife Sanctuary and Chelbi Sanctuary in Ethiopia. As well as this, they’re often found in National Parks in Kenya.

In 2016, the plains zebra population was estimated to be around 500,000 in the wild. Because of this, they were classified as near threatened by the IUCN (International Union for Conservation of Nature).

In the UK, black and white stripes crossing the road are known as zebra crossings. The most famous zebra crossing in the world is the Abbey Road crossing in London. This is where The Beatles walked across for the cover of their eleventh studio album.

On March 28, 2014, Wendy Jarnet claimed a Guinness World Record for owning the most zebra-related items. She won the record with 508 items, ranging from soft toys to clothing and jewelry. 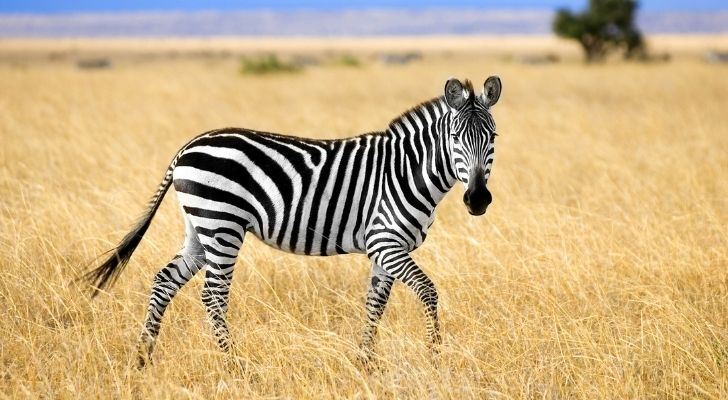 Zebras are truly remarkable creatures; their stripes have been talked about for hundreds of years, zebra fouls look adorable, and you won’t find them in small groups.

What more could you want from an animal that is covered in white and black stripes?

Next time you go to the zoo or on safari in the wondrous land of Africa, and you’re lucky enough to spot a zebra or even a zeal, why not share some of these interesting zebra facts?