Michelle Gabriel
5 Minutes Read
Updated: August 28, 2022
Did you know that the eyes of a horse are bigger than those of any other land mammal?

Horses are beautiful creatures to look at, and thousands of fanatics enjoy riding them or showing them every year.

Horses are called different names depending on their gender.

Baby horses even have different names!

Young horses have different names – a young male is called a colt and the young females are fillies.

Baby horses can walk and run after just a few hours of being born.

There are fewer bones in a horse than in humans.

It’s only one bone less, but in total, there are 205 bones in the skeleton of a horse.

The oldest horse lived over twice as long than he was supposed to.

Horses which have been tamed usually live to be around 25 years old.

However, the oldest domestic horse on record was Old Billy, who died at the age of 62.

Horses can sleep standing up or lying down.

Many people think that when a horse is lying down that means it’s sick.

However, these creatures can sleep either standing up or lying down.

Horses have a lookout…

A group of horses will not go to sleep at the same time – at least one of them will stay awake to watch out for the others.

Horses are often seen in photographs “laughing” or “smiling”, but this movement is actually to help them smell better.

Their diet is plant-based.

The fastest horse ran over double the usual speed!

For a regular horse, their top speed is approximately 27 miles per hour, although the fastest horse ever recorded could reach 55 miles per hour!

There’s no need to worry about horse population…

There are an estimated 60 million horses in the world, combining wild and domesticated horses.

The eyes of a horse are bigger than those of any other land mammal, and the fact they are located on the side of their heads means they can see almost 360 degrees.

Experts used to believe that horses were completely color-blind, although this has now been disproven.

They can, however, see certain colors a lot clearer than others.

Horses float when they run.

Well, sort of! When a horse gallops, all four hooves are off the ground at one point.

Their teeth take up tons of room.

Its brain only weighs around 22 ounces, making it just half the weight of a human brain.

They’re not so different than us people.

Like humans, horses have different facial expressions to express their moods.

Horses do not have a gag reflex.

Unlike many other mammals, it is impossible for horses to vomit.

Horses have their own form of measurement.

A hand is equivalent to four inches. Ponies are horses which are under 14.2 hands high.

There are way more types of horses than you would have thought!

There are surprisingly more than 300 different horse breeds in the world!

The tallest horse ever was over seven hands taller than a normal horse.

Sampson was a Shire horse and the tallest on record.

He stood at a staggering 21.2 hands high.

The smallest horse was barely taller than a foot.

By contrast, the smallest horse ever was a tiny 14-inch pony from New Hampshire. His name was Einstein.

Horses are big fans of water, and will drink a minimum of 25 gallons every single day. In warmer countries, this amount is even higher.

Horses can be bred to make a different species.

While zebras and horses are often considered to be totally different animals, they can breed with each other to create “zebroids”.

Zebras will also mate with donkeys and produce “zonkeys”.

Horses can be cloned.

In 2003, a horse was cloned for the first time. The cloning took place in Italy.

It’s easy to tell if a horse needs a blanket!

If you feel behind the ears of a horse and they appear to be cold, this means that the horse itself is feeling cold.

Horses have been used in the police force since the 17th Century.

Although they became less popular with the introduction of the automobile in the early 20th Century, hundreds of horses are still used by the police today.

The oldest horses have been around as long as the Egyptian Pyramids.

The Arab is thought to be the oldest surviving breed of horse. Experts believe they first appeared about 4,500 years ago.

In some places, horse meat is a delicacy.

In certain countries, including France, horse meat is considered an expensive delicacy.

Although it is illegal in several other countries, the French enjoy eating horse heart and horse brains.

Horses can remember more than you think…

Studies showed that horses have excellent memories – possibly even better than that of an elephant!]]

Horses have been domesticated for thousands of years and have a special relationship with people.  They’ve been there in our time of need for both transportation and companionship.

Horses are smarter than we think and like us humans they show a range of facial expressions.

Have we missed any horse facts out that you love? Feel free to share them in the comments below. 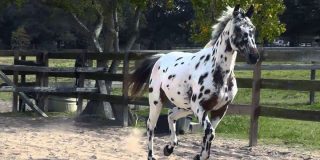