Shash Wighton
5 Minutes Read
Published: October 6, 2022
Did you know that the Stegosaurus ate stones called gastroliths to help them digest their food? 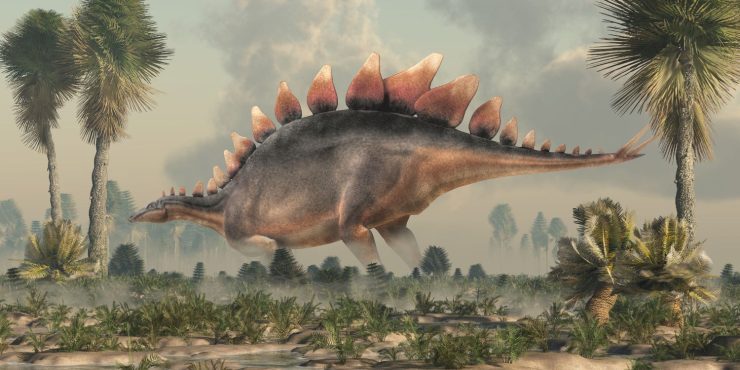 When you gaze upon a modern illustration of a stegosaurus, they can look rather frightful with their spiky tails and large, sharp plates adorning their backs.

Any five-year-old would happily tell you that these dinosaurs are nothing to worry about, though, as Stegosaurus were purely herbivorous.

Whether that’s now the extent of your knowledge on these fearsome-looking beasties or you know other facts here and there, it doesn’t matter – as we have some far more exciting facts about Stegosaurus just for you!

Their name is a little bit confusing. 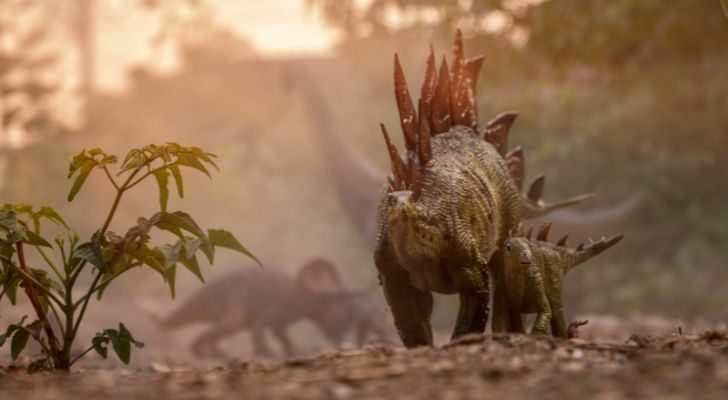 Like many other dinosaurs, when the first stegosaurus fossils were discovered, we didn’t know how to put them together.

What made stegosaurus fossils particularly puzzling was that they had all these plate-like bones but no clues as to how or where they were attached.

The first paleontologists on the scene decided that they lay flat on the dinosaur’s back and, as such, named the new dinosaur “stegosaur,” meaning “roofed lizard.”

Nearly all fossilized stegosaurus bones have been discovered in the US. 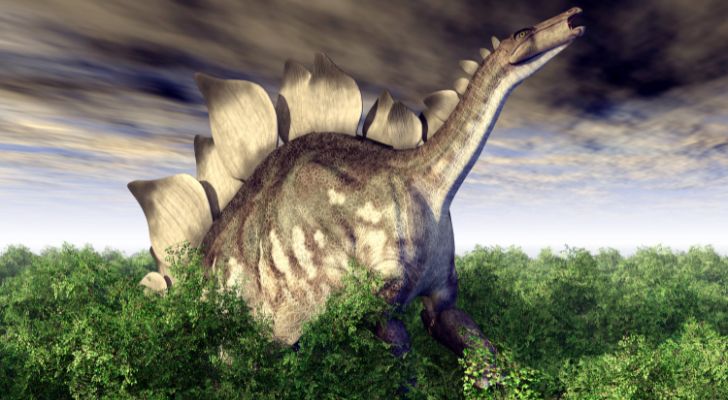 American geologist Arthur Lakes discovered the first fossilized bones of a stegosaur in a quarry in Morrison, Colorado.

Soon after, they were described as a new species by Othniel Charles Marsh in 1877.

Within a short time, many other fossilized remains were realized from Stegosaurus, with several new subspecies being defined.

Until 2007, all stegosaurs’ fossils were found in the US. In 2007, though, fossils believed to belong to the stegosaurus family were found in Portugal.

The spiky plates on their back weren’t for defense. 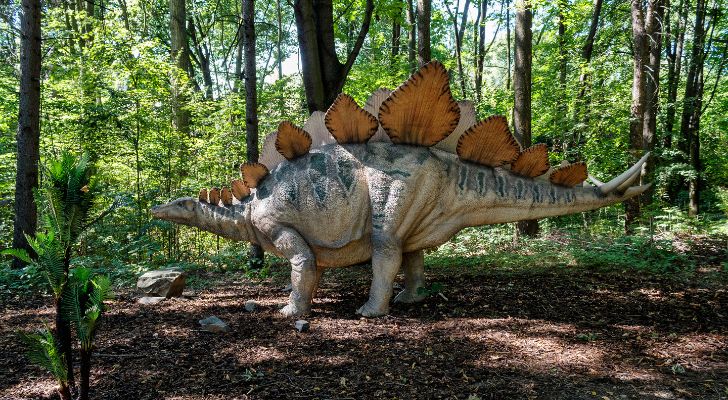 At first, stegosaurus plates were believed to fit along their backs much like a turtle’s shell, but this theory was quickly debunked.

Then, scientists thought they were used for defense, but with so few plates protecting their backs, this didn’t help much.

Another theory supposed that the plates helped the dinosaur regulate its body temperature, but this wouldn’t have helped all that much with thermoregulation.

The latest view is that they were purely ornamental and helped Stegosaurus attract mates.

Their tails have a specific name invented by a comic artist. 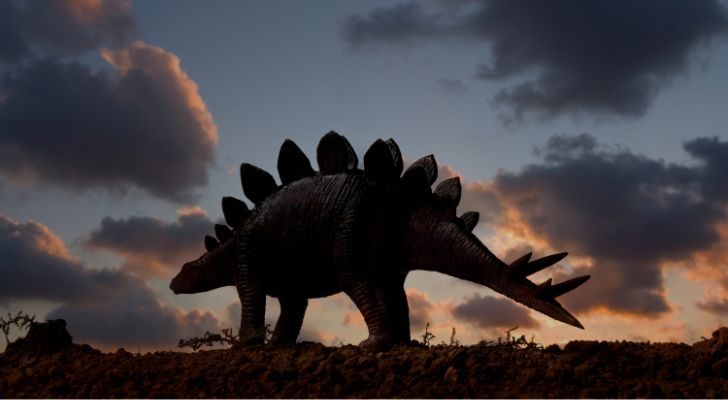 In 1982, cartoonist Gary Larson, the man behind the famed comic The Far Side, produced a comic strip where a bunch of cavemen is being taught the name of a stegosaurus’ tail.

The comic describes the tail as a “thagomizer… after the late Thag Simmons”.

Paleontologists obviously found this hilarious, as it’s been used officially by them ever since!

Stegosaurus brains were no bigger than walnuts. 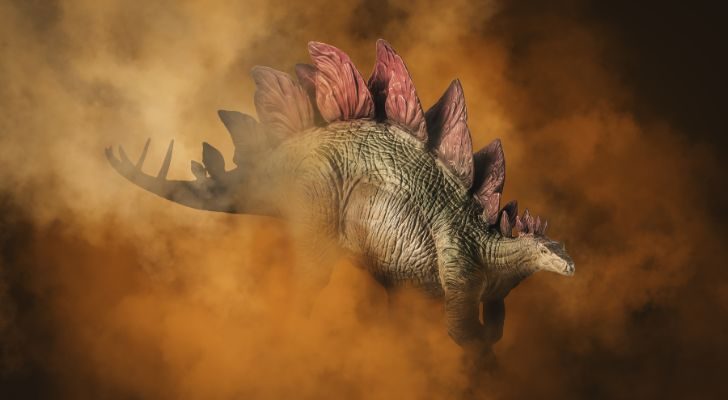 Shortly after the Stegosaurus was first discovered, a plaster cast of its brain cavity was made, and it was quickly realized that they were far from being the brainiest dinosaurs.

In fact, at the time, they had the smallest brains of any known dinosaur, weighing in at just 2.8 ounces (80 g). This was spectacularly small for a 5-ton (4.5 metric ton) dinosaur!

While we have no idea what kind of processing power their tiny brains had, we can’t imagine they were able to think about anything particularly complex.

They may have eaten rocks to help with their digestion. 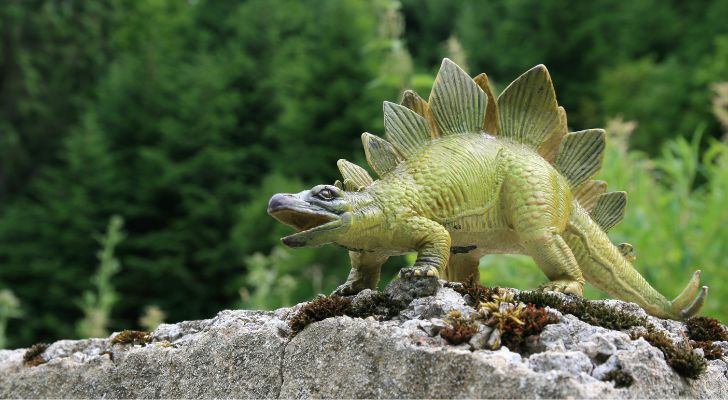 These herbivorous beasts had to eat copious amounts of plant matter just to fuel themselves enough to walk around, so they couldn’t discriminate too much about which plants they ate.

At some point, some clever stegosaurus figured out they could eat stones that would bounce around in their stomachs and help break their meals down even further and poop them out once finished.

These stones, called gastroliths, were commonly used by many herbivorous dinosaurs and are even found in some modern creatures today, like chickens!

Scientists in the 1800s thought stegosaurus brains were in their butts. 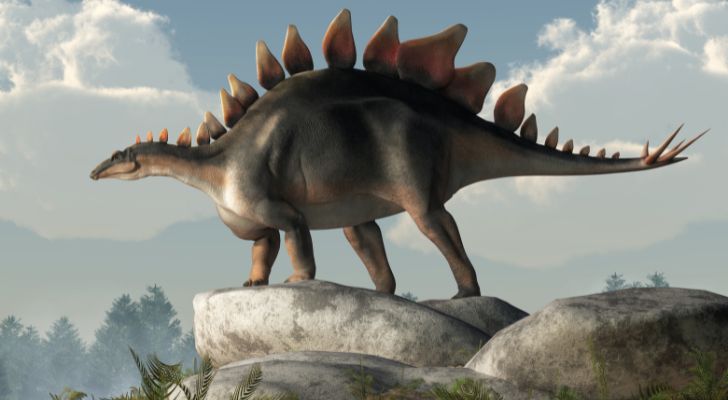 While it would undoubtedly have been hilarious, it has since been thoroughly disproved.

The thing is that stegosaurus’ were discovered very early in the paleontology game when many dubious claims were being made.

It was none other than Othniel Charles Marsh, the man who first described the Stegosaurus, that claimed that they may have had brains in their butts due to the minuscule size of their brain cavity and a large cavity found in the posterior. 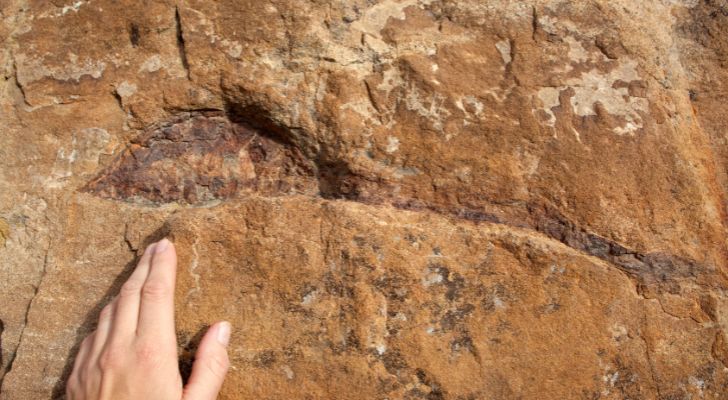 For those not in the know, US states like having official state things, such as the state food, drink, animal, and even dinosaur.

While the first Stegosaurus was discovered in Colorado in the 1800s, it wasn’t until 1982 that it finally became the state’s official fossil!

In total, there are three different species of Stegosaurus that we know about from fossils discovered in Colorado.

Stegosaurus’ had special armor, just not on their backs. 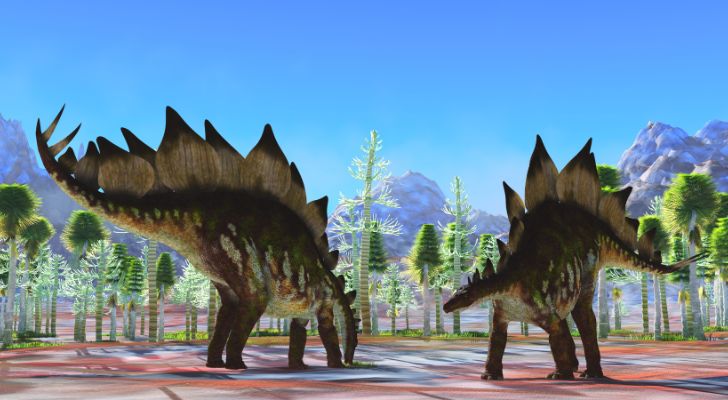 One thing that Othniel Charles Marsh got right when he first described the Stegosaurus was the serious protection they had on their necks.

It’s known as “gular armor,” with “gular,” meaning neck, and was made up of many circular pieces of bone embedded within the skin of the throat.

This most likely helped protect against any predators that would otherwise go for the jugular.

A writer in the 1920s put forward the idea that they could fly. 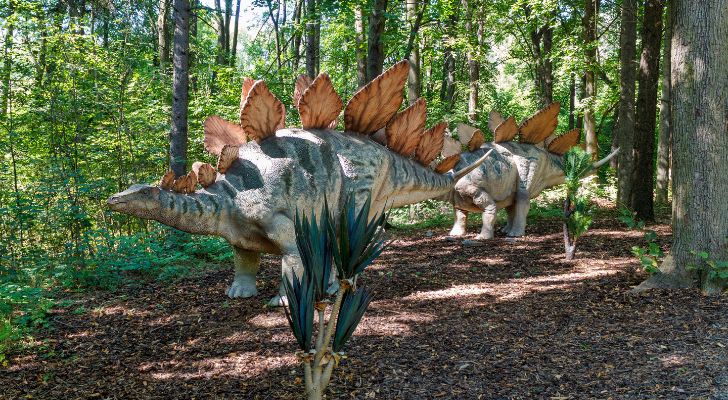 This one’s a bit silly, but how could we forget about W.H. Ballou, a paleontology enthusiast and writer who once wrote for Utah’s Standard Examiner newspaper?

His article, which came off as very authoritative on the subject, claimed that the Stegosaurus was able to use the spikes on its back to fly, or at least glide – imagine that, if you dare!

So there you have it, the Stegosaurus in all its walnut-brained glory!

Just remember to thank us for the next time you come across a pouty five-year-old who thinks they know dinosaurs better than you, as you’ll have no trouble outsmarting them – if you remember any of this, that is! 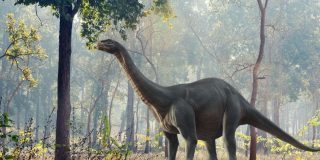 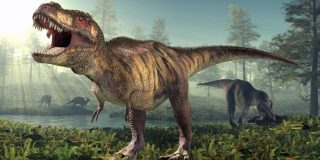 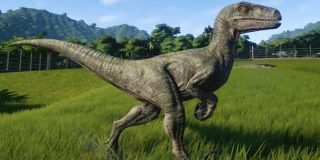