Nicknamed “The Land of Lincoln” and “The Prairie State,” Illinois was the 21st state to join the United States of America on December 3, 1818.

Illinois is bordered by the states of Iowa, Michigan, Kentucky, Missouri, Wisconsin, and Indiana.

The capital of Illinois is Springfield, just south of the center of the state.

That’s enough fast facts about the Prairie State for now, though; we’re here to learn some real facts!

Illinois’ name derives from a word that means “he speaks the regular way.” 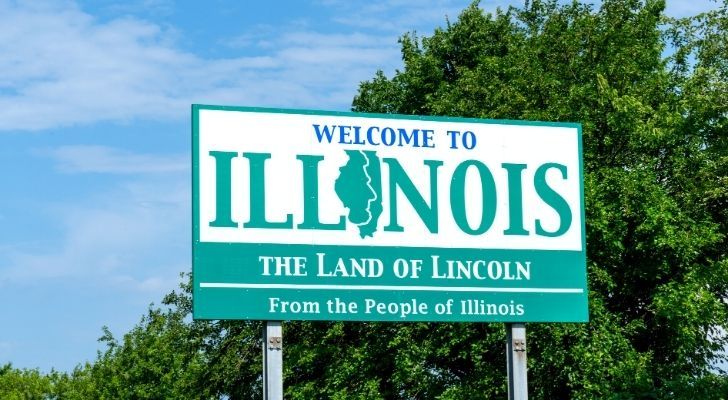 Early French Catholic Missionaries to the Illinois region made contact and communicated with the Illinois Native Americans, and it was these people that the state was named after.

Of course, it isn’t quite that simple, though.

The name Illinois is how the French missionaries interpreted the Miami-Illinois verb “Ilinwek,” which translates into “he speaks the regular way,” which was used by nearby tribes to describe the Illinois people.

Interestingly, Illinois people referred to themselves as “Inoka,” which the missionaries even recorded yet evidently ignored.

The Illinois region has been inhabited for thousands of years. 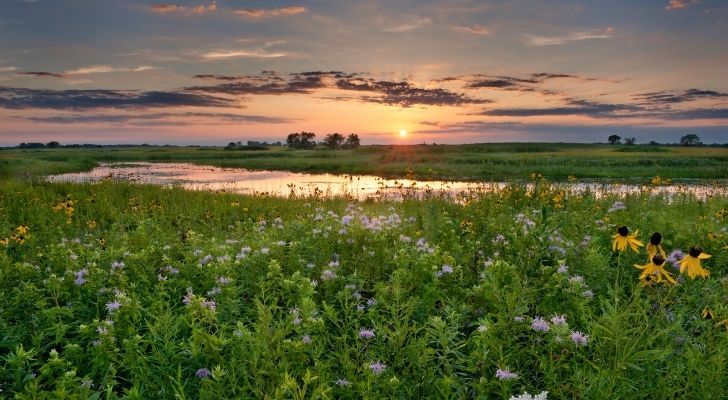 The Illinois region had seen many tribes rise and fall long before Europeans first heard of the Americas.

One of the oldest recorded sites is the Koster site, which lies near the Mississippi River on the western edge of Illinois.

Excavated in the 70s, evidence was found which proved constant human habitation for more than 9000 years, dating back to at least 7500BC.

An even more important site is Cahokia, the largest chiefdom in pre-Columbian Mississippi culture, inhabited from at least 600 BC until around the 14th Century AD.

The first European explorers to make their way to Illinois were French. 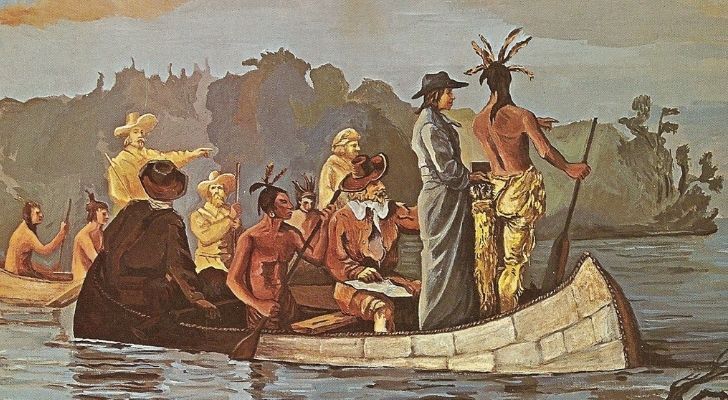 The French missionaries and explorers Jacques Marquette and Louis Jolliet were the first Europeans to find their way into modern-day Illinois when they made their way down the Illinois River in 1673.

Illinois changed hands many times before becoming a US territory. 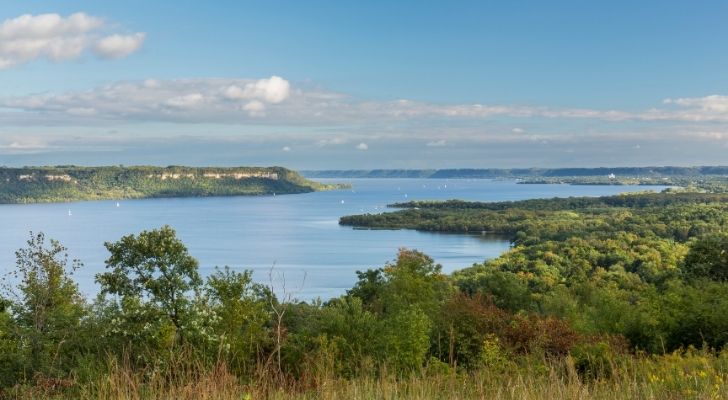 As time went by, more and more Frenchman passed through Canada and traveled down the Mississippi River, settling a large part of the region.

The settled areas of Illinois became a part of New France and then La Louisiane but were eventually handed over to the British in 1763 after France’s defeat at the end of the Seven Years War.

It wasn’t until 1783 that the land came under US ownership as a part of the Northwest Territory.

Chicago has been Illinois’ largest city since 1857, and it’s no small wonder. 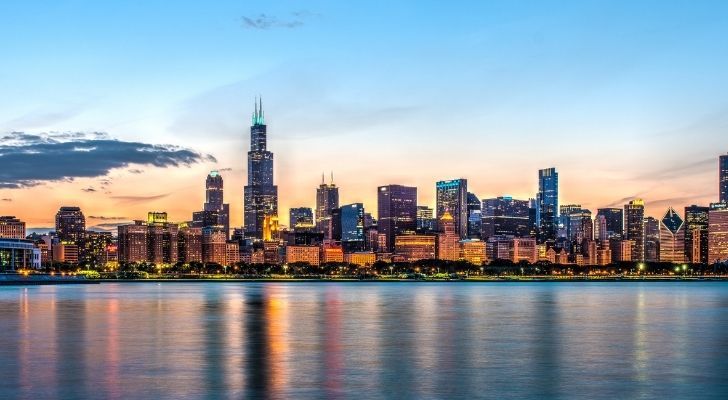 The Town of Chicago was established on the banks of Lake Michigan on August 12, 1833.

It began as a relatively insignificant town but was shortly recognized for its crucial location, which connected the western and eastern United States.

By 1848 the Galena and Chicago Union Railroad and the Illinois and Michigan canal were constructed, which cemented Chicago’s geographical importance.

As of 1848, all transport between the Mississippi River and the Great Lakes had to pass by Chicago.

As you would expect of such a well-placed city, the population boomed, and it’s hardly stopped growing ever since! 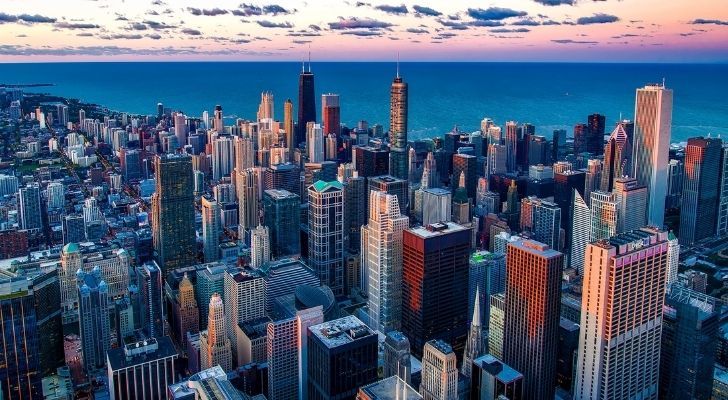 By 1837 the town was incorporated into the City of Chicago with a population of 4000, and it enjoyed the title of “World’s Fastest Growing City” for several decades.

The founder of the Latter-Day Saints was slain in Illinois. 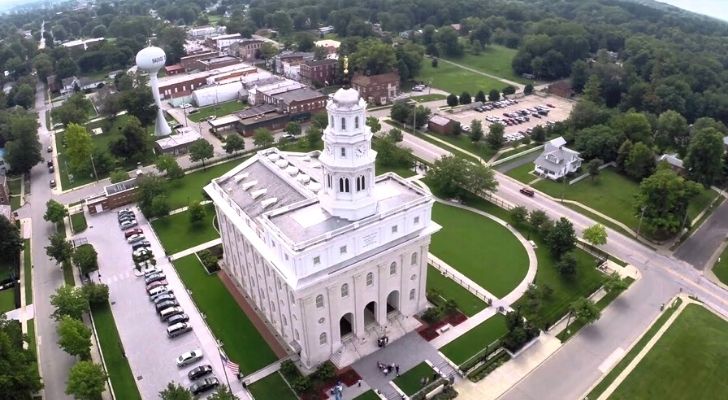 The idyllic yet forgotten town-sized city called Nauvoo lies on a bend of the Mississippi River near the junction of Illinois, Iowa, and Kansas.

Founded in 1827, the area of Nauvoo was originally named Quashquema in honor of the local Native American chieftain.

In 1839 Joseph Smith, the leader and founder of the Latter-Day Saints, escaped persecution along with his followers to Nauvoo.

By 1839 the newly arrived Latter-Day Saints bought the town, building it into a thriving city of 12,000, equaling Chicago at the time.

Times were difficult for the Latter-Day Saints, with violent opposition from both neighbors who opposed their beliefs and ways of life and from ex-communicated community members.

The conflict came to a head when Joseph Smith and his brother were arrested in Carthage, Illinois, for destroying a printing press that was being used to defame their church.

Instead of standing trial, the brothers were attacked by an armed mob and slain.

The ex-Mormon town of Nauvoo became a socialist utopian society. 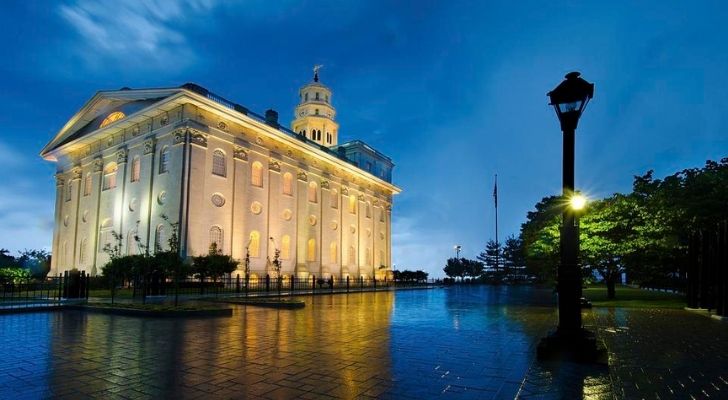 In 1844 the Latter-Day Saints were all but forced out of the region after the death of Joseph Smith, leaving the town all but empty.

It just so happened that at the same time, a French philosopher by the name of Étienne Cabet was looking for the perfect location to establish Icaria, a utopian commune with socialist values.

After Cabet and the Icarian attempts failed in Texas, they bought land in Nauvoo and established a settlement in 1849.

The colony was short-lived, though. From the very beginning, it was riddled with problems, the largest of them being a lack of money to purchase the required equipment to establish a proper settlement.

At its largest, Icaria numbered around 500 people, but by 1856 it was disbanded after the death of Cabet.

More than 250,000 men from Illinois served in the American Civil War. 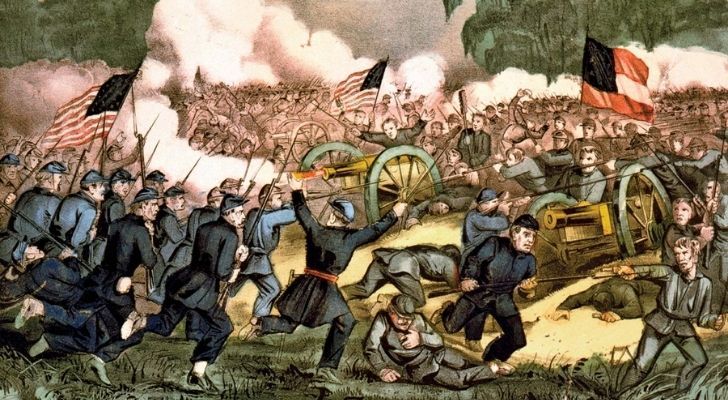 There were only three states that surpassed Illinois in fighting men – New York, Pennsylvania, Ohio.

Of the troops Illinois mustered for the war, there were 150 infantry regiments, seventeen cavalry regiments, and two light artillery regiments.

Illinois didn’t just contribute troops to the war effort, though.

The town of Cairo, located in the south of the state, was strategically important and was used both for training the Union army and as a supply base.

Almost a third of Chicago was burned down in 1871. 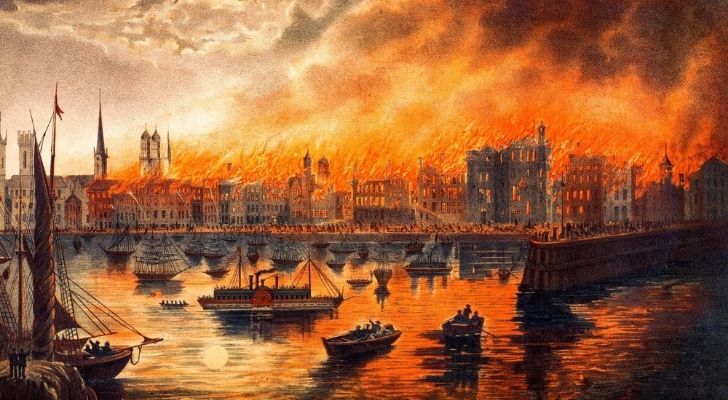 It became known as the Great Chicago Fire, and it burned fiercely from Sunday, October 8, until October 10, 1871.

Approximately 300 people lost their lives to the blaze, and more than 100,000 people were left homeless.

Legend says that the fire was started in a barn belonging to the O’Leary family when their cow tipped a lantern over, igniting the barn.

At the time, the most common material for buildings was wood, and what would have otherwise been an overall insignificant small fire destroyed a third of Chicago.

The world’s first skyscraper was constructed in Chicago in 1885. 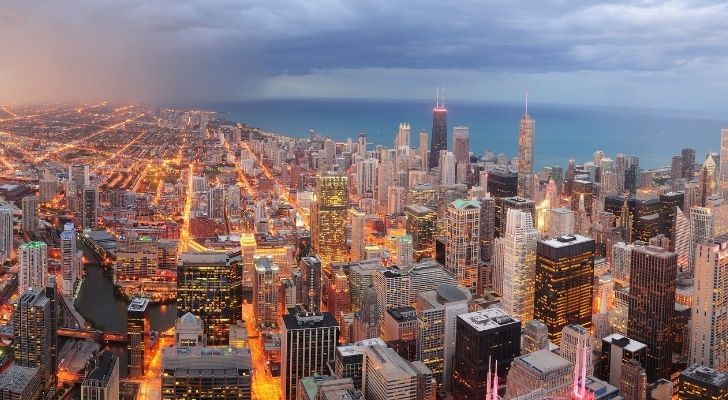 After the smoke and rubble of the Great Chicago Fire cleared, it was discovered that the railway lines and other stone or steel constructions remained unscathed.

New building codes and regulations were put in place, and Chicago was rebuilt using stone and steel rather than timber.

During this period of renewal, the world’s first skyscraper was constructed.

It was made with a steel skeleton and rose to ten stories high.

27 million visitors descended upon Chicago in 1893 to visit the World’s Columbian Exposition. 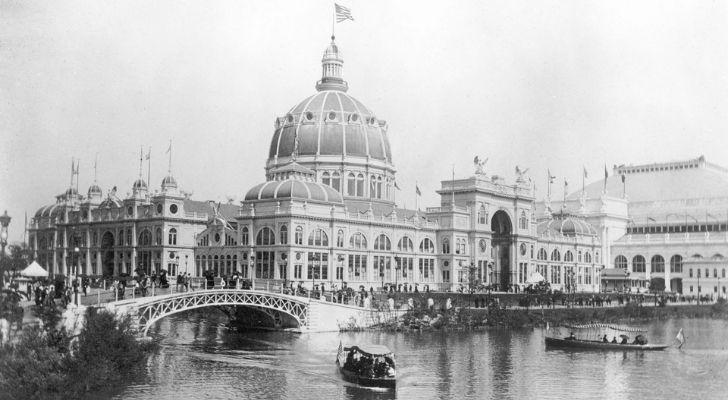 The World’s Columbian Exposition of 1893 was a World fair that has seen little to compare it to since.

It was held for many reasons: to celebrate 400 years since Columbus’ exploration of the Americas, celebrate Chicago’s rise from the ashes, and showcase many marvelous new inventions.

The most notable invention to be showcased at the fair was the world’s first Ferris Wheel.

Illinois was at the forefront of the Nuclear Age. 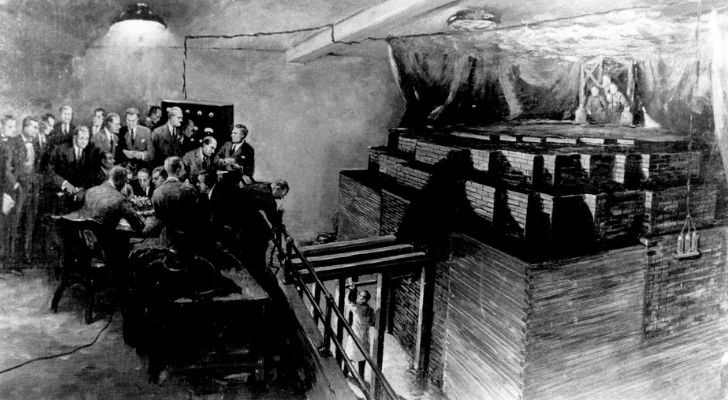 The University of Chicago was one of the many universities involved in the Manhattan Project, responsible for developing the first nuclear weapons.

The University of Chicago was responsible for creating the first sustained nuclear reaction in 1942, and in 1957 a laboratory near Chicago activated the first experimental nuclear power generator.

Illinois was also home to the world’s largest particle accelerator for 40 years.

It was constructed at a national nuclear research base in 1967 near the city of Batavia.

Springfield, Illinois, is not the Springfield from The Simpsons. 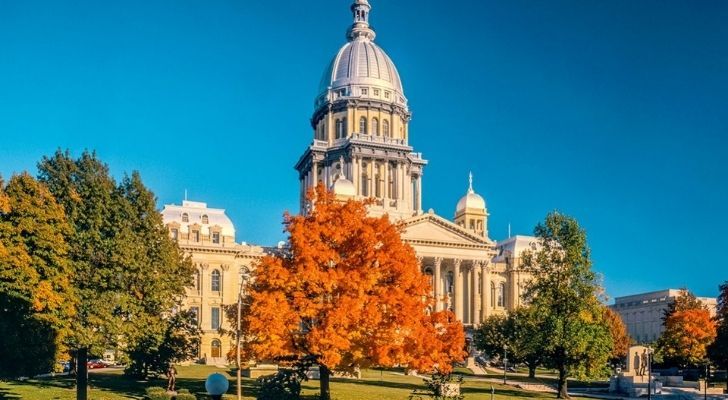 Speaking of Nuclear power plants, it’s worth letting you all down now.

No, Illinois state capital is not what Matt Groening based The Simpsons hometown off.

Matt actually declared this as a fact in 2012, stating that he chose the name Springfield because there are many cities and towns across the US with this name.

He thought it would be nice for everyone to wonder if it was their hometown that he had based it on.

The highest point in all of Illinois is less than a quarter of a mile high. 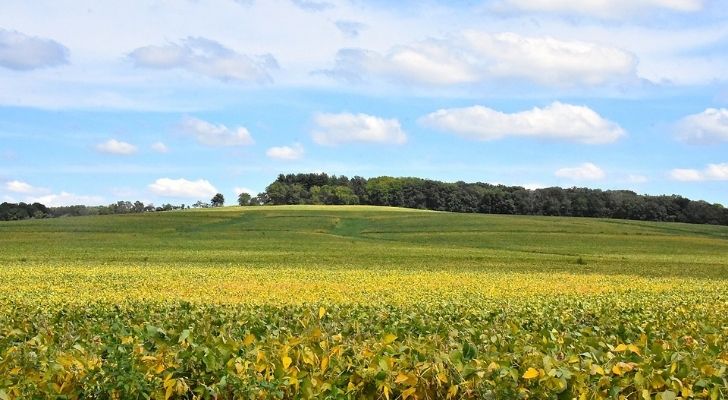 Illinois is a pretty flat state. Really, it’s one of the flattest in the US, with its highest point being just 1,235 feet (376 m) high.

This point is known as Charles Mound and can just be visited a few times every year.

No, it’s not an officially protected area or anything – it’s just at the top of someone’s driveway!

Being a mid-western state, Illinois was pretty rough around the edges in its formative years.

If it hadn’t been for Chicago’s establishment on the trade route from the Great Lakes to the Mississippi River, Illinois would have been a completely different state!