Many people have heard of badgers, but few actually get a chance to see them in the wild.

This cute little guy is best observed from a distance anyway, as they are known to get into quite a temper if approached!

To save you from studying badgers up close and risking a close encounter, we’ve collected up some awesome facts so you can get to know them better!

There are actually eleven different species of badgers! 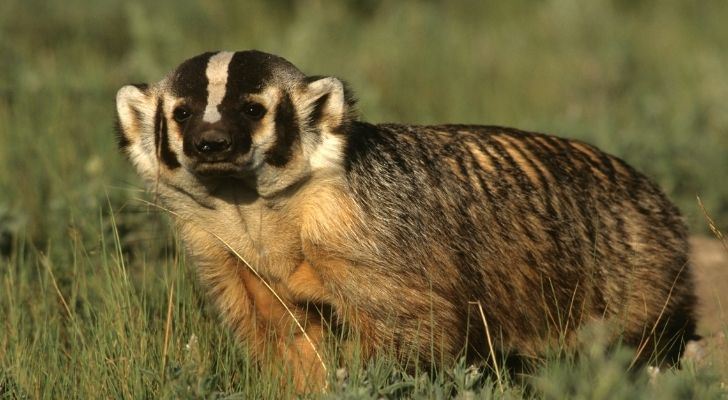 These eleven species are commonly grouped into up to four subspecies: Mellivorinae (the honey badger), Taxideinae (the American badger), Melinae (the European badger, and three other species), and Helictidinae (5 species of a type of badger/ferret cross).

The American badger is found in parts of Mexico, the US, and Canada.

The European badger is, surprisingly, found nearly everywhere in Europe.

On the other hand, the honey badger is more broadly spread out in India, Southwest Asia, and Africa.

All badgers belong to the Mustelidae family. 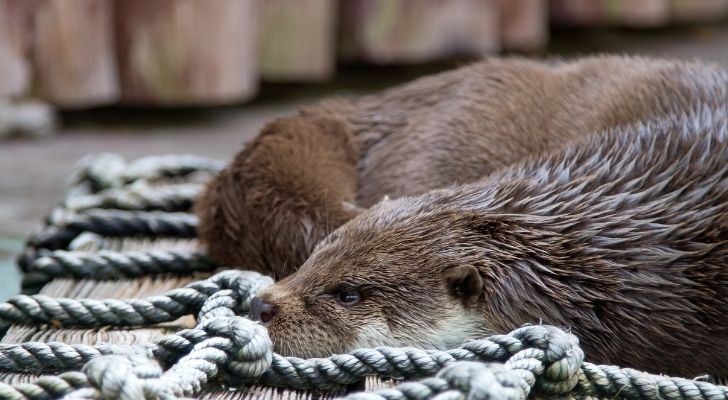 Badgers aren’t the only member of the Mustelidae family, though.

Other notable animals which are grouped in with badgers include weasels, otters, ferrets, and minks.

The Mustelidae family is an incredibly diverse group of animals, with some 50-60 species.

It’s so large, in fact, that it’s the largest family of carnivorous animals.

We have many different names for badgers. 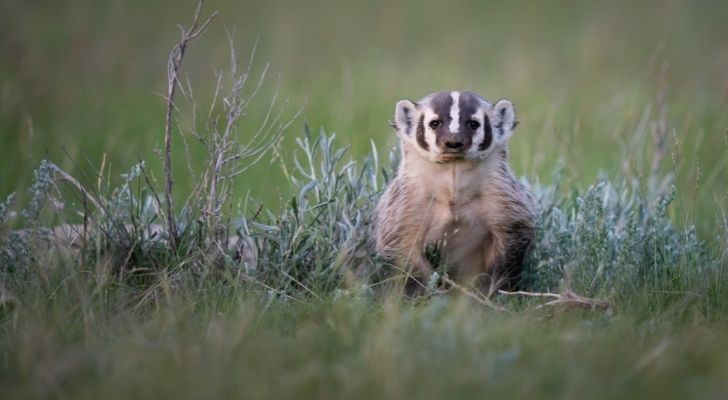 The most common collective noun for badgers is a cete, but they’re commonly called a clan when it’s a colony of badgers. 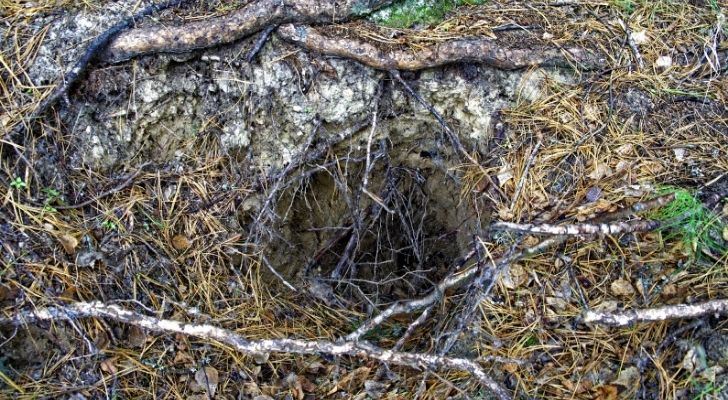 All types of badgers live underground in tunnels that they dig, but not all live in groups.

Both the American and the honey badger live most of their lives as solitary animals, so their setts would be much smaller.

During mating season, these more solitary badgers will temporarily increase their territory.

European badgers are quite different, often being found in large clans.

On average European badgers are found in groups of six, but there are records of groups as large as 23 all living in one sett.

Dachshunds were once used for hunting badgers. 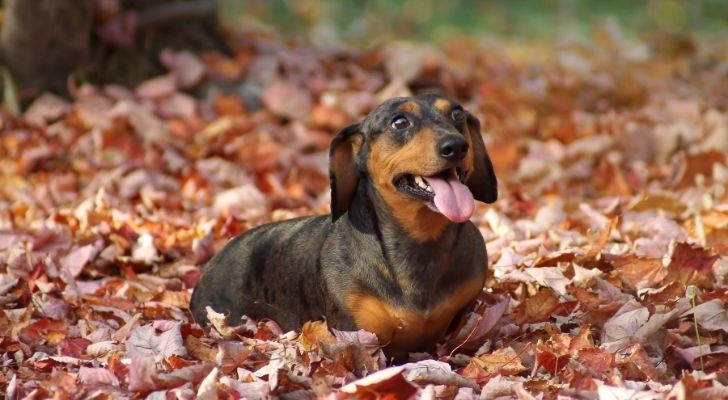 While in English, we commonly refer to these adorably comical dogs as sausage dogs, their German name actually makes a lot of sense when you consider their history.

In German, the dachshund is a compound word made up of the words badger and dog.

Due to their short legs, dachshunds can run into a badger’s sett and flush it out, making them the perfect dog for the job.

As they are dogs from Germany, they would have been chasing European badgers.

There are a few different theories behind the history of the badger’s name. 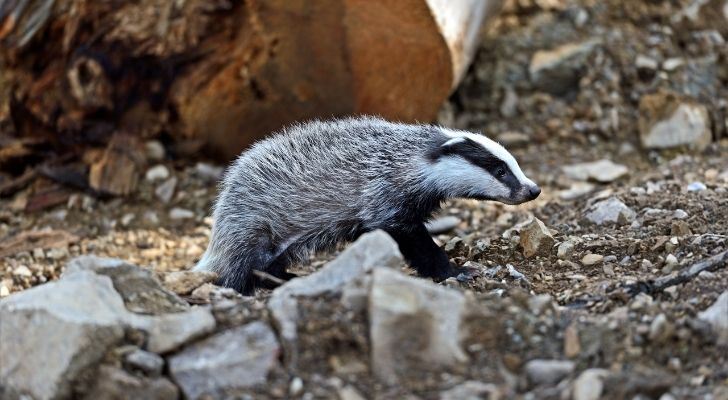 One of the most commonly held ideas is that the word badger comes from the older word “badgeard,” as in something which has a badge on it, in this case, a white one on the forehead.

Another commonly held origin is that the word badger comes from a French word that has connections to the adjective “digger.”

The word for a badger in Welsh, “mochyn daear,” is much more interesting, as it quite literally translates to “earth pig!” 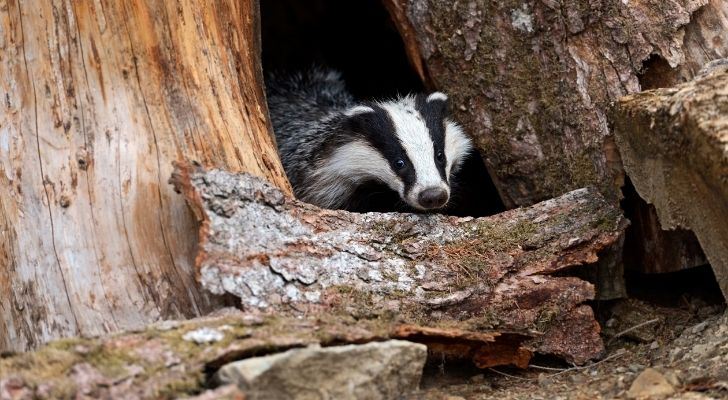 All badgers live underground, so it would get very messy down in their setts if they weren’t quite cleanly animals.

The good news is that they are!

They replace old and worn-out bedding that they accumulate in their setts and have separate communal bathrooms, which they dig far away from the main part of their burrow.

The only thing is that their poop is a little bit pongy, as they also use it to mark their territory. 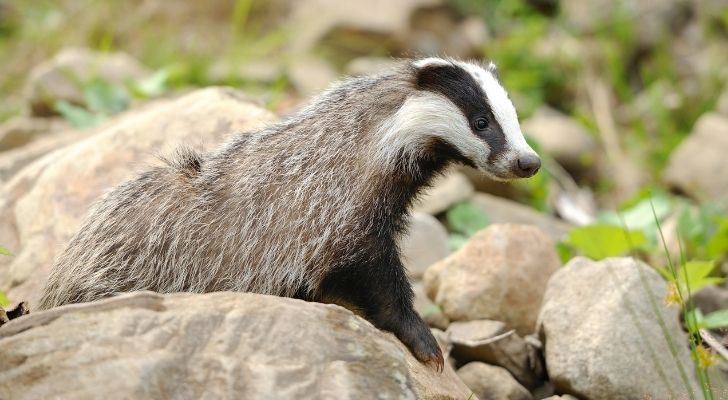 Despite being burrowing animals that sometimes live in areas with cold winters, badgers don’t actually go into hibernation.

Instead, they simply slow down a lot over winter.

In addition to being less active, they also go into states of torpor, which is an extremely long sleep that can last as long as 29 hours, where they go into a kind of stasis.

American badgers and coyotes often team up and hunt together. 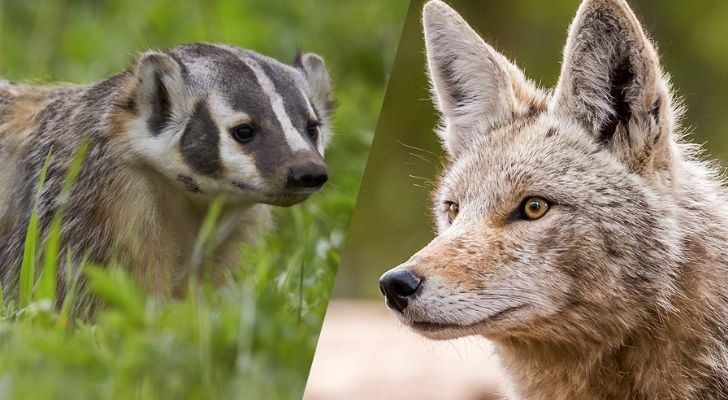 It turns out that this unlikely pair of predators join forces quite regularly when hunting, as their different strengths allow them to hunt with ease.

They’re most commonly found hunting together in the summer months of the year.

They work so well together because badgers can root out any prey that hides underground, and a fox is able to chase it down afterward.

Badgers don’t need any help from foxes in winter, though.

During winter, many animals burrow underground and hibernate, which makes easy pickings for badgers.

Badgers are a protected animal in the UK. 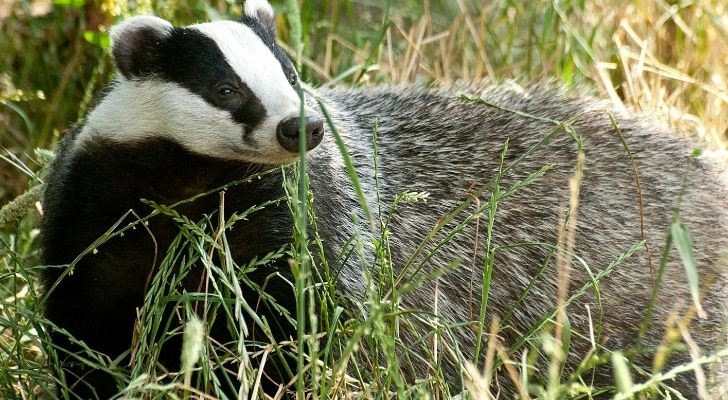 For a long time in the UK, it was believed that badgers were pests that often caused issues for farms.

Much more recently, badgers in the UK were also believed to be a possible source of the spread of mad cow diseases (bovine tuberculosis).

Fortunately, both of these beliefs are, for the most part, behind us, with badgers now enjoying a status of protection which makes it illegal to maim or kill badgers in the UK.

Honey badgers are said to be one of the most fearless animals on the planet. 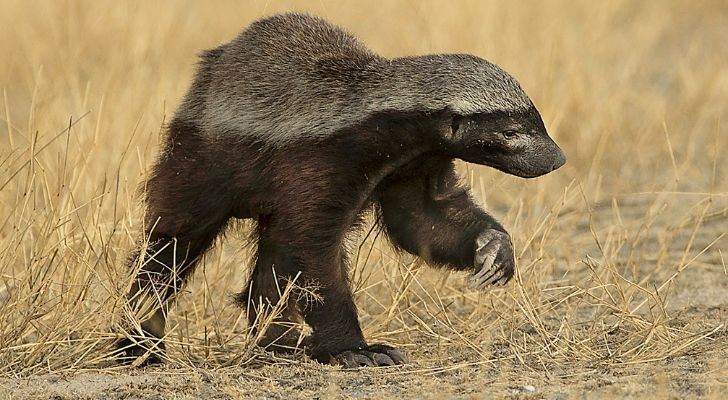 As we’ve mentioned previously, honey badgers are quite unlike their cousins.

In fact, they’re much closer to a weasel, despite still being taxonomically grouped in with badgers.

They’ve built up a reason for being incredibly fierce little guys who don’t back down from a fight.

They’re actually omnivores, so they also eat a variety of fruits, berries, and roots in addition to what they hunt.

They’re so crazy that they commonly hunt down cobra snakes and take them out with ease.

Even if they get bit by a snake, they will simply pass out for a while and then get back to the task. It’s no wonder they’re fearless!

Badger burrows can be more than 100 years old! 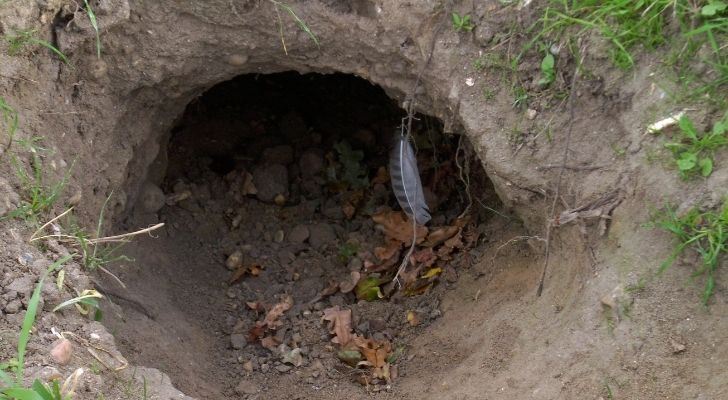 Sometimes these setts can be so large that they have as many as fifty entrances!

Because of the immense amount of work required to carve out a sett of such size, they are commonly passed down from generation to generation, being maintained and improved upon as time goes by. 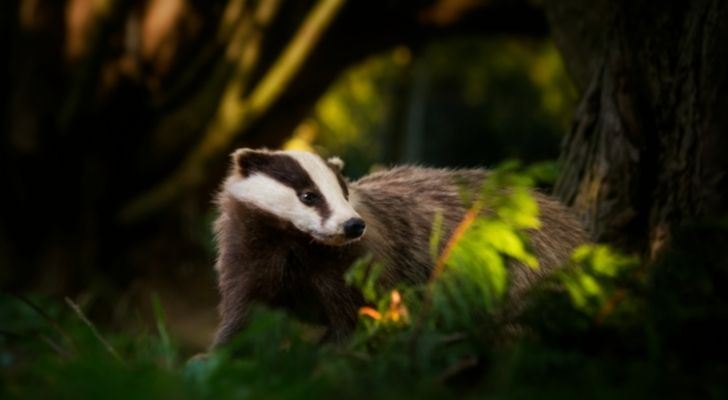 For the most part, badgers spend their night hunting or foraging and spend their days nestled up asleep in their setts.

The most common exception to this is found with American badgers that live far from any places of human activity.

In these conditions, American honey badgers are quite commonly seen out and about foraging throughout the day.

Honey badgers are some of the only non-primate animals in the world to use tools. 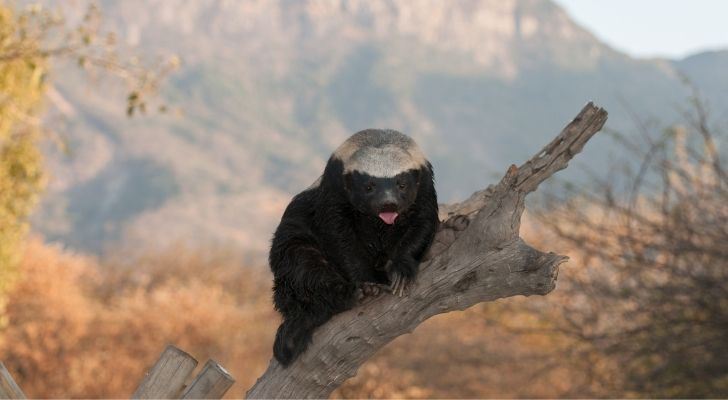 When most people think of animals that can use tools, they think of monkeys.

Surprisingly, the crafty little honey badger is also among the ranks of animals that adeptly use various tools.

The BBC has recorded one particular case in South Africa where a honey badger would carry and prop up various tools, sticks, rocks, and even chunks of mud up against the edge of his enclosure to escape.

It’s been seen that this is more than just moving an object around; the honey badgers truly use various objects deftly – in this case, to escape! 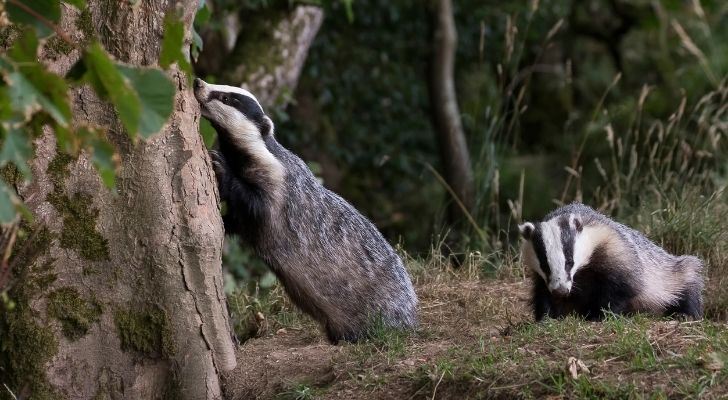 Some of the oldest archaeological evidence of badgers living within the UK were dated as far back as 250-500,000 years ago.

This means that badgers were going around doing their thing around the same time that wolverines, arctic foxes, and brown bears were roaming the UK!

It makes sense that badgers have been around for so long when you consider how resourceful they are.

They’ve managed to carve out a cozy spot for themselves in the animal kingdom, so let’s do everything we can to protect them for future generations!

They are cute, after all.