Why Do We Eat Pumpkin Pie At Thanksgiving? 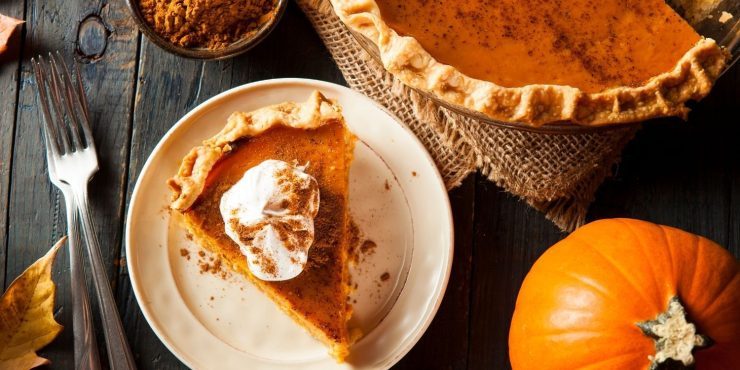 Thanksgiving is a time of year when we get together with our families and celebrate peace over a giant feast, consisting of roast turkey and pumpkin pie.

Have you ever wondered why we eat pumpkin pie and not apple pie?

In this article, we look at the history of thanksgiving and the significance of this tasty treat.

There are many reasons why pumpkin pie is made for thanksgiving, some relating to the season, others to history.

In the USA thanksgiving sits at the beginning of the fall season and this is celebrated over a feast consisting of seasonal food.

Pumpkin and squash are harvested in North America and Canada during the fall, therefore being a seasonal crop, it is in abundance at this time.

It makes sense to use a crop that is around at the time because it is affordable and accessible for everyone.

It is estimated that around 50 million pumpkin pies are consumed for thanksgiving every year in the USA.

Why pumpkin and not apple?

Northeastern Native American tribes grew pumpkin and squash as a staple to their diet.

Pumpkin is native to the western hemisphere and has been cultivated as a crop long before foods such as corn and beans.

Native Americans have been farming pumpkins for over 9,000 years.

The oldest pumpkin seed found in a tomb in Mexico dates back to around 7,000 BC.

Pumpkins were first cultivated in the Tehuacan and Oaxaca valleys in around 6,000-5,000 BC.

Not only were they a staple crop for Native tribes across North America, but they were sacred and often used for rituals and celebrations.

As technology has developed and we have become industrialized and the scale of farming pumpkins has increased dramatically.

In 2018 according to the USDA National Agricultural Statistics Service reported that 1.5 billion pounds of useable pumpkins were harvested that year alone.

Where does the tradition come from?

In 1621 some of the earliest American settlers came across pumpkin for the first time and were new to eating it.

Early recipes describe ways of cooking pumpkin, which would have involved hollowing out a pumpkin and filling it with milk, spices, and honey.

They would have then roasted this on a fire to create a sweet stew.

It became a tradition for the Native Americans to bring the pumpkins to the settlers as gifts and they showed them how to cook and prepare pumpkins.

The first Thanksgiving was held between the Wampanoag Tribe and Plymouth Colonists in New England.

It was a joint celebration of a successful harvest and it is said that a variety of pumpkin pie would have been served on this day alongside the celebratory feast.

Research suggests this is where the tradition originated.

Are pumpkin pies the same today?

One of the first-ever recorded recipes of pumpkin pie was by French chef Francois Pierre la Varenne.

He became famous for his recipe book title Le Vrai Cuisinier Francois, which translates to The True French Cook.

The cookbook from the 17th Century contained one of the first recorded recipes for making pumpkin pie which was translated into English in 1653.

Here is an extract of the translation into English on how to make a pumpkin pie.

“Tourte of Pumpkin – Boil it with good milk, pass it through a straining pan very thick, and mix it with sugar, butter, a little salt and if you will, a few stamped almonds; let all be very thin. Put it in your sheet of paste; bake it. After it is baked, besprinkle it with sugar and serve.”

This recipe was the base for creating the pumpkin pies we eat for thanksgiving today.

What goes into making a pumpkin pie? 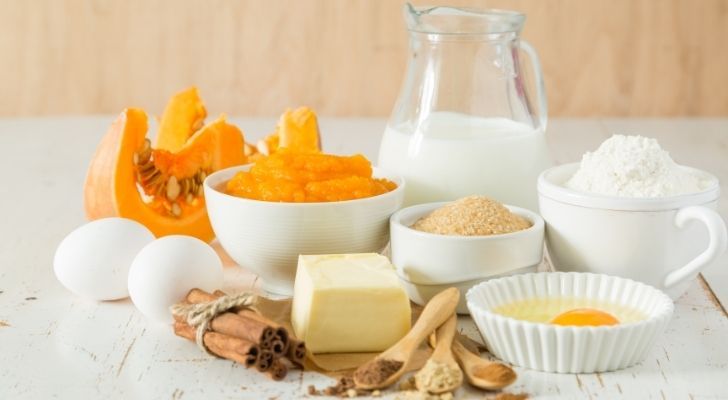 Back then it was called Pumpion Pie, as this was (the now archaic) word from pumpkin.

This was when experimentations with spices such as cinnamon, nutmeg, and cloves began.

Some recipes included adding apples and raisins for added flavor.

Most recipes have continued to follow the basis of using pumpkin, milk, eggs, sugar, cinnamon, nutmeg, salt, butter, and a pastry for the crust.

What is the biggest pumpkin pie ever made? 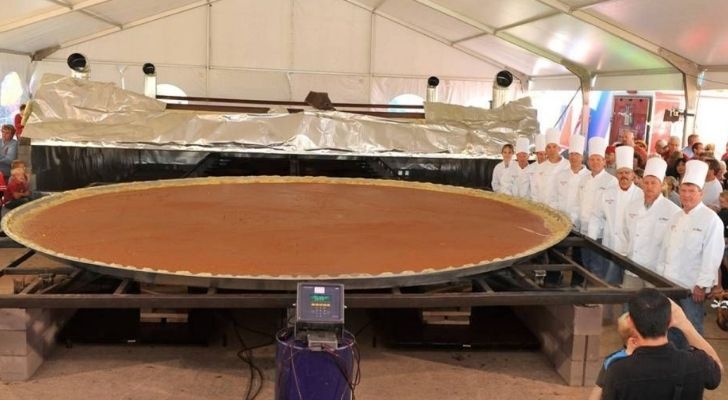 As you are aware there is almost a competition for everything and in 2010 a new world record was set.

The biggest pumpkin pie in the world was made on September 25, 2010, at the New Bremen Pumpkin fest in Ohio.

It measured a record-breaking 20 feet (6.09 meters) in diameter!

440 sheets of dough were used to make the crust.

Pumpkin pies are eaten for thanksgiving because they are not only tasty but readily available and follow tradition.

The pumpkin pie is a symbol of the land and the cultivation of pumpkins and squashes by Native Americans.

Pumpkins have fed many for thousands of years and they are an important part of the diet as they grow in abundance and are affordable for almost everyone.

The pumpkin pie was a creation made with the help and guidance of Native Americans and is an important part of celebrating thanksgiving. 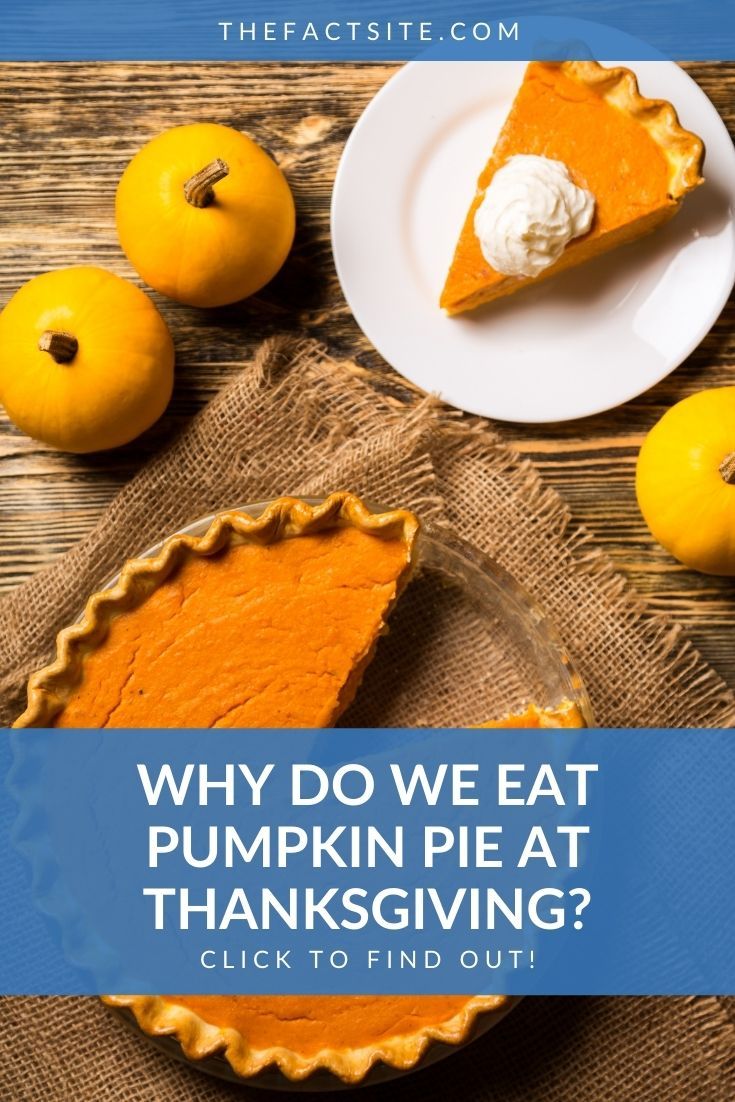 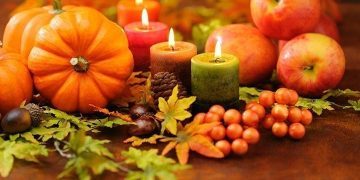 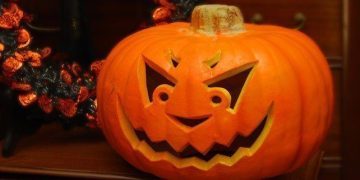 10 Facts About Pumpkins To Prepare You for Halloween 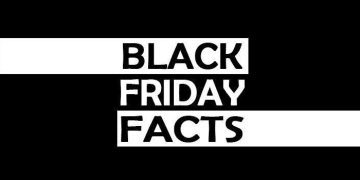 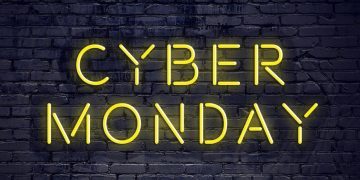 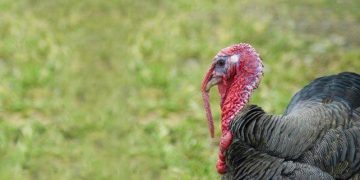