Wales is probably the most beautiful country you never heard of! Although part of the UK, it is its own separate country.

Having started as the Celtic nation of Cymru, throughout the centuries it was bullied by the larger powers of the time, including the Romans and the English.

Following revolt after revolt, including the Glyndŵr rising in 1400 and the Chartist uprising of 1839, Wales begrudgingly joined with the larger England.

Nevertheless, throughout these tumultuous times, Wales showed itself to be a proud, strong and determined nation, defending its land and its people until it became the principality that it is today.

Yes, it does rain a lot here and it is very hilly, but the landscape, culture and rugby make up for it.

From the Brecon Beacons to the Llŷn Peninsula, it also has resilient and honest people.

So without further ado, here are the 30 fascinating facts you need to know about Wales!

Wales has more castles per square mile than any other European country, with Caerphilly being the largest in Wales and the second largest in Europe behind Windsor. Unfortunately, many were built as a way of controlling the Welsh people.

The corgi dog (the Queen’s favorite!) originates from Wales; it means dwarf-dog or cor-ci.

Felinfoel Brewery in South Wales, the oldest in Wales, was the first outside the US to sell beer in cans starting in 1931.

The first boundary between England and Wales came in 784AD with the creation of Offa’s Dyke by King Offa of Mercia.

Bill Frost was a Welsh inventor who apparently took to the air 8 years before the Wright brothers in his ‘Flying Machine’ in Saundersfoot 1895 before crashing into a tree.

Blackadder III said of Wales, “You need half a pint of phlegm in your throat just to pronounce the place names.”

The Welsh village of Llanfairpwllgwyngyllgogerychwyrndrobwllllantysiliogogogoch is the second longest place name in the world meaning: St Mary’s church in the hollow of the white hazel near to the rapid whirlpool of Llantysilio of the red cave.

Joseph ‘Job’ Daniels from Aberystwyth, West Wales, emigrated to the US in the 18th century. His grandson Jack went on to create the world renowned Jack Daniels whiskey – you’re welcome!

The Welsh have their own language, aptly named Welsh or Cymraeg, but only 11% in 2014 are fluent although 23% say they can speak some Welsh.

Despite many years of extraction, Wales still has an immense source of many natural materials, and is responsible for many countries’ supplies from coal and slate to copper and steel. At one point, South Wales made up 40% of all coal exported by the UK.

Rugby is the national sport of Wales. The first international game took place in 1881 between Wales and England. Throughout 1907 and 1910, the Welsh were undefeated.

The world’s first radio message sent by Guglielmo Marconi in 1897 took a 3 mile journey from Larvernock Point, south of Penarth, Wales, to Flat Holm in the Bristol Channel.

Anthony Hopkins, the spine-tingling Hannibal Lecter actor, was born in Wales in 1937.

Al Capone’s accountant Llewelyn Humphreys, aka Murray the Hump, came from a Powys family and at one point was America’s most wanted man. He took control of the mob after Capone’s incarceration.

Microsoft offer a version of windows called ‘Welsh Windows’ recognizing Welsh as the most popular of the Celtic languages and its linguistic diversity.

Wales were the first nation to win the Rugby Grand Slam when they beat Ireland in Belfast in 1908. The team had to wear trial jerseys without the Prince of Wales feathers because someone packed the wrong kit!

The British royal family use Welsh gold for wedding rings. This tradition was continued in the royal wedding of 2011 by the Duke, the future Prince of Wales, and Duchess of Cambridge.

Every year an Eisteddfod, a festival of poetry, literature and music, is conducted across with Wales, with the first being held by Lord Rhys at Cardigian castle in 1176.

The Welsh flag of red, green and white was officially recognized from 1959. The dragon allegedly came from an Arthurian legend which told of wizard Merlin’s vision of a red dragon fighting a white This purportedly represented the battle between the native Britons (red) and Saxon invaders (white). The red dragon won and the green and white refer to the colors of the House of Tudor.

St Patrick, the patron saint of Ireland, was actually Welsh! A resident of Banwen in the Dulais Valley, he was apparently taken to Ireland by Irish slavers.

For St David’s Day 2014, residents in Bala, North Wales, cooked the world’s largest Welsh cake. The fruity griddled flat-bread measured an astonishing 5ft (1.5m) wide and weighed 48lbs (21.7kg)! After that mammoth creation, it would have been rude to waste so it was subsequently cut into 200+ pieces.

Welsh is spoken by ¾ million people across England, the US, Canada and Argentina. Welsh speakers of Wales benefit from legally enshrined bilingual road signs and the Welsh-exclusive TV channel, S4C.

Donald Davies, a computer pioneer, played a huge part in paving the way for the internet, having created packet-switched networking.

Dylan Thomas, the world renowned poet and writer of ‘Under the Milk Wood’, was born in Wales in 1914 – but with a name like Dylan you may have guessed that!

The Welsh Millennium Center, opened in 2004, is inscribed with part of a poem by Gwyneth Lewis. It reads, “Creu Gwir Fel Gwydr o Ffwrnais Awen” (Creating truth like glass from the furnace of inspiration).

The Welsh love-spoon is an iconic symbol across the world, originally carved by men to their respective lover’s family as a sign he was capable and skilled with his hands. Each symbol is representative of something, from the knot representing love, to the twist meaning the couple’s bond.

Spillers Records, located in Cardiff, South Wales, claims to be the oldest record shop in the world. According to its website, it originally specialised in phonographs, wax phonograph cylinders and shellac phonograph discs.

Roald Dahl, the world famous children’s author of so many tales including Charlie and the Chocolate Factory, Matilda and The BFG, was born in Cardiff in 1916. 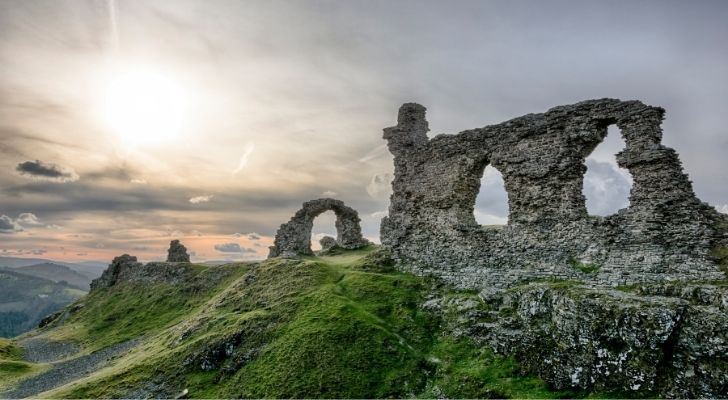 So there we have it; for many their first insight into the weird and wonderful world of Wales! I hope these facts have intrigued, astounded and enticed you into visiting this magnificent country – believe me it’s worth it!

Whether you come for the food, the culture, the landscape or just the history, you’re bound to find a million and one things you never knew. And who knows, you may even pick up a Welsh phrase or two!

Whether anyone understands you is another matter and if not, believe me, it’s not your fault, it’s the majority of Welsh residents for not speaking their glorious language!

And with all those mind-blowing facts swirling through your head, I’ll say diolch am ddarllen (thanks for reading).

Now, pick up a Welsh cake, have some half and half (rice and chips; a Welsh staple!) for tea and maybe wash it down with a nice Jack Daniels and coke. Iechyd da! (Cheers!).