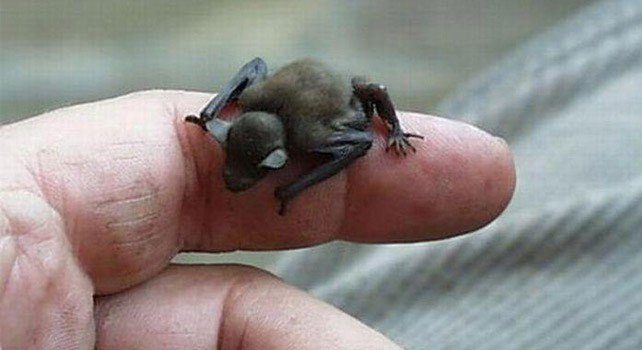 Not only is the Bumblebee bat, (or Kitti’s Hog Nosed Bat as it is also known as) the world’s smallest bat, but it is also the worlds smallest mammal.

These cute little creatures are just 29 – 33mm in length, and have a wingspan of approximately 170mm and weigh a tiny amount of 2 grams!

Below is a collection of some of the most interesting facts about the worlds smallest mammal.

Their upper part of their body is normally a reddish/brown or gray color, whilst their underside is pale in color.

They have dark colored wings with long tips that enables them to hover in the air.

On their face they have a pig-like nose, small eyes and large ears. They have a large web of skin between their back legs, known as the “uropatagium”. This gives them assistance when in flight.

They are most active at dusk when they fly around teak trees and clumps of bamboo capturing insects.

The Bumblebee Bat is found in areas in Sai Yok National Park in the Kanchanaburi Province of western Thailand. They have also recently been discovered in Myanmar.

They live in small colonies of around 10 – 100 individuals high up in limestone caves in forested areas near rivers.

Very little is currently known about their reproduction. It is believed that they give birth to a single young at the end of April each year.

The Bumblebee Bat is named so, because of its similar size to a large bumblebee.

They were first discovered by the Thai biologist, Kitti Thonglongya, in 1973.