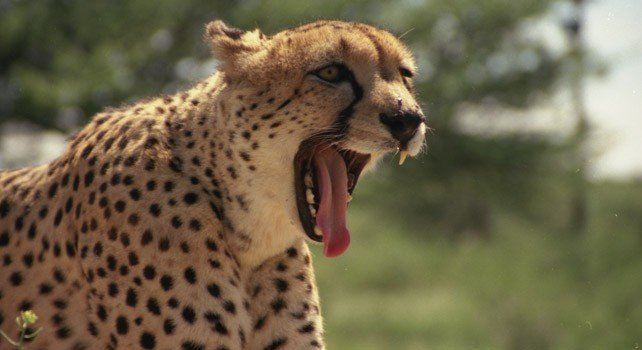 If you’re a lover of animals, cats or knowledge then you’ll love these interesting facts about the adorable speedy big cat, the cheetah.

The Latin name for the cheetah is Acinonyx jubatus.

They generally inhabit Africa and the Middle East.

Including their tail, they can measure up to 92 inches.

Their spots can be up to 1.5in in diameter.

The black ‘tear tracks’ that line a cheetah’s face prevent the sun from infiltrating and blinding the animal whilst hunting.

A cheetah has semi-retractable claws, like the Fishing Cat, Flat-Headed Cat and the Iriomote Cat.

The King cheetah had distinctive black stripes, as well as spots. This cat is now extinct.

The spots of a cheetah are used for camouflage.

During chase, the cheetah can take up to 150 breaths per minute.

It can reach up to 62 miles per hour in five seconds.

A normal chase speed for a cheetah is 60-65 miles per hour.

The tail is used as a rudder for steering whilst chasing.

Interestingly the cheetah cannot roar. In fact, it purrs.

It is considered to be the smallest of the big cats.

It is the least able to adapt to its environments.

There can be up to nine cubs in a litter.

The distinctive fluff of the cubs is a mantle, and gives them the appearance of having Mohawks.

A cheetah can live up to twelve years in the wild, and twenty in captivity.

A male cheetah is social able, and is often seen in small groups.

Whilst social able, the males can be extremely territorial and urinate on plants and trees to mark their land.

A female cheetah tends to roam and they form home ranges, which tend to overlap with other lands.

Cheetahs eat a variety of gazelles as well as impala and springbox.

The cheetah prefers to hunt early morning or late at night, when it is not so hot.

During the chase for prey, a cheetah trips its meal and suffocates it.

If a mother takes her cubs with her during the hunt, she will hide them in the thick underbrush for safety.

A cheetah has different purrs for different times:
a. The chirp is used when they try to locate more of their species. In documentaries, this is often seen when the cubs call out to their mothers.
b. Churring or stuttering is used to greet others, or invite the opposite gender into mating.
c. Growling is used when the creature feels that it is in danger.
d. Yowling is a higher pitch of growling, often heard when danger increases.
e. Purring is used when they feel content, usually seen with the mothers and cubs.