God flooded the earth because he regretted creating humans.

Who came to rescue the earth from God’s destruction? An old man named Noah, who was really old.

After God chose him, he built this gigantic ship that housed thousands of animals and kept them safe from God’s destruction of the Earth, aka The Flood.

But we still have some questions. Who was Noah’s wife? How long did he stay on the Ark? Was Noah a good and righteous person? And what does the Tower of Babel have to do with the Flood?

Take a look at some of the most interesting facts concerning Noah and the ark he built.

God flooded the Earth because of human wickedness — but it wasn’t entirely the human’s fault. Angels came down from heaven and “saw that the daughters of humans were beautiful, and they married any of them they chose.” According to ancient sources like Enoch, once the evil angels and humans mated, their offspring were giants.

These giants were called Nephilim, and “they were the heroes of old, men of renown.” Bonus fact: Goliath was a Nephilim.

We don’t know for sure if the Nephilim are the ones to blame for The Flood. Some experts believe their mentioning in Genesis before The Flood is reason enough for God to wipe the human race off the Earth.

God chose Noah because he could build ships. He sinned like the other humans, but he was “a righteous man, blameless among the people of his time.” This could mean that if Noah lived in a different time period, he would have been judged more harshly for his actions.

Methuselah, the oldest person in the Bible at 969 years old, is Noah’s grandpa.

We don’t know his mother’s name, but Noah’s dad was Lamech.

Noah is the 10th generation descendant of Adam.

He was a farmer.

We don’t know Noah’s wife’s name. She’s only mentioned as Noah’s wife in the Bible.

Noah had three sons: Shem, Ham, and Japheth. He was 500 years old when he had his three sons.

The Ark’s wood is a mystery. The King James Version of the Bible says the Ark was made from “gopher wood,” but trees with that name do not exist today. Scholars say scribes may have copied the wrong word. Instead, in the NIV version, the Ark used “cypress wood,” which was commonly used by Phoenicians when they built ships.

The Ark is measured in cubits, which comes from the Latin word “cubitum,” or elbow. The length of a cubit is measured from a man’s elbow and the tip of his middle finger.

The cubit is not a standard measurement. It ranges between 15 and 22 inches, so the exact dimensions of the Ark could vary.

The Titanic was about three times bigger than the Ark, with a volume of 4.6 million cubic feet.

It took over 100 years to build the Ark. At the time the Ark went off on its journey, Noah was 600 years old.

The Ark had three stories and a roof with a small opening below it – but no steering wheel. It was made to float, and God steered the ship at will.

Rain and “floodgates of the heavens were opened” for forty days and forty nights. According to the Bible, the water was 15 cubits high, or about 23 feet.

The floodwaters stayed for 150 days, and then they receded for another 100 days. That’s when Noah sent out his dove, and it came back with an olive branch.

Noah and his family (wife, sons, and sons’ wives) were stuck on the Ark for one year and ten days.

After coming off the Ark, God showed a rainbow as a sign of his covenant (promise) for all mankind that he would never flood the Earth like that again.

God told Noah not to eat “meat that has its lifeblood still in it.”

Noah was the first drunk. He created the first vineyard in the history of mankind; then, he drank his invention until he was naked in his tent.

His son, Ham, found him drunk and naked in his tent but didn’t do anything about it. All he did was call out to his brothers Sham and Japheth. When Sham & Japheth arrived, they dragged their drunken dad out of the tent, covering their eyes so as they couldn’t see their dad naked.

Because Ham didn’t help Noah, Noah cursed Ham to become a slave to Sham and Japheth. Noah then blessed Sham & Japheth for their actions. This also explains the fight between the Canaanites (descendants of Ham and Canaan, Ham’s son) and the Semites (descendants of Sham).

According to Josephus, the Tower of Babel was waterproofed with bitumen in reaction to the Flood to protect themselves from another flood.

No one knows where the Ark is currently located. After it rested on Mount Ararat, many expeditions have tried to find it, but there has been no hard evidence yet.

Marco Polo was one of the discoverers who found the Ark after a three-day hike in the snow. 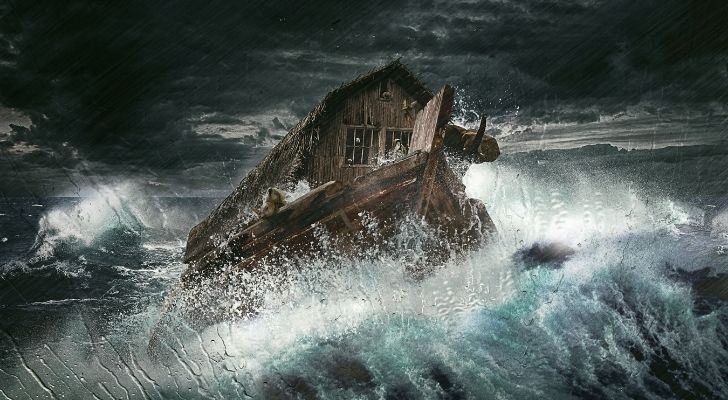 So, there you have it, we know that God flooded the planet because he had a change of heart after creating humans.

However, humans did survive after the chosen Noah created his huge boat to accommodate countless animals to survive the tides.

Now you know the ins and outs of Noah’s life, from being hundreds of years old and being a farmer to creating his great Ark.

Let’s hope he comes to the rescue during the next great global flooding!