Creativity and making artwork has always been part of human nature and research has led us to believe that cave art was one of the first ways of expressing creativity.

It is difficult to say exactly what the oldest piece of cave art in the world is, as we are still discovering new things every day.

As technology progresses we are able to analyze ink pigments and the surrounding land to get a more accurate prediction of how old a cave painting might be.

Over the more recent years, as technology has developed, explorers have been able to delve deeper into cave networks across the world to find pieces of cave art.

Many pieces have been found in hidden cave networks lying beneath mountains and tucked away in jungles, from Asia to Europe, but it is difficult to know exactly which drawing was made first.

There are a total of 400 recognized cave drawing sites in Europe alone.

How is Cave Art Made?

Cave drawings are usually made from an ink pigment, most commonly a red or black ink.

For engravings, sharp tools or rocks with sharp edges would have been used to engrave into the cave walls.

In Europe a lot of the cave networks found with etchings, are caves formed from limestone, which is a very soft stone making it easier to carve into.

Here are some examples of the most well-known and oldest pieces of cave art found to date.

The Oldest Piece of Cave Art in the World 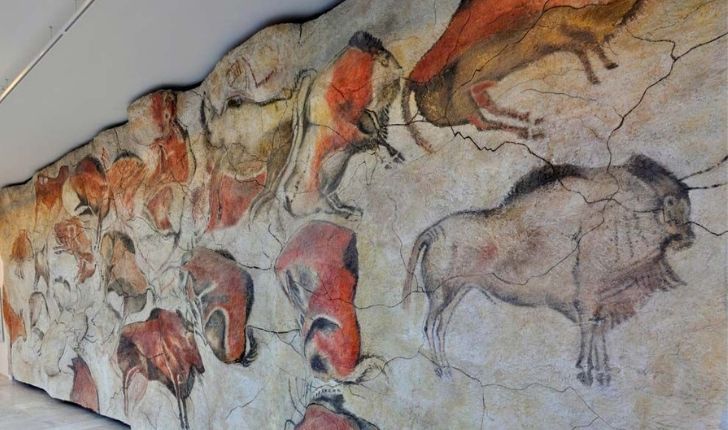 Some of the oldest cave art around the world has been discovered throughout cave networks in Europe.

Most of the paintings and engravings date back to the Ice Age, from roughly around 40,000 to 14,000 years ago.

The most well-known piece of cave art can be found in the Altamira Cave in Northern Spain.

The ochre and charcoal images depict bison and horses as well as hand prints that date back to 36,500 years ago.

These particular drawings were discovered in the 19th Century by Marcelino Sanz de Sautuola.

These however are no longer the oldest pieces of cave art as other drawings have been found across three different cave networks in Spain, but more solid evidence is still needed for these caves to take the title.

Some of the cave drawings that have been found date back to around 65,000 years ago and are presumed to have been made by the Neanderthals, rather than Homo sapiens.

Although there have been more discoveries of possibly older cave art, the drawings found in the 3b, dating to around 36,500 years ago have the strongest evidence and therefore still hold the title of oldest in the world. 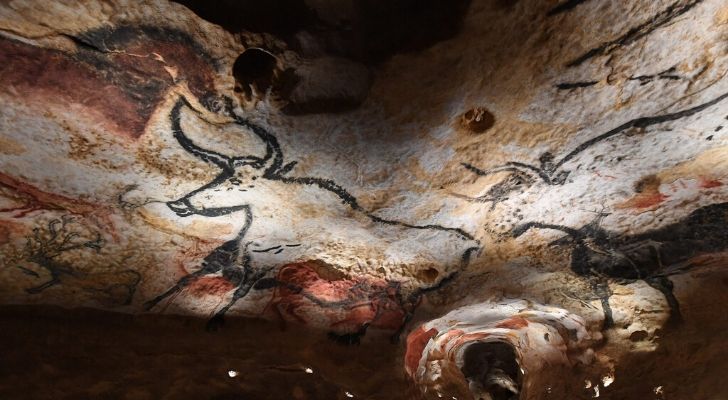 This complex cave network in South Western France has some of the most famous cave art on display.

Although it is not necessarily the oldest in the world as it is dated to be around 17,000 years old, it contains some of the most beautiful and complex drawings of deer, bull and horses.

It contains one of the largest animal cave drawings found in the world, which is of a bull spanning 17 feet (5.18 meters) long, situated in a 72 feet (22 meters) gallery of cave drawings.

The Oldest Record of Storytelling through Cave Art 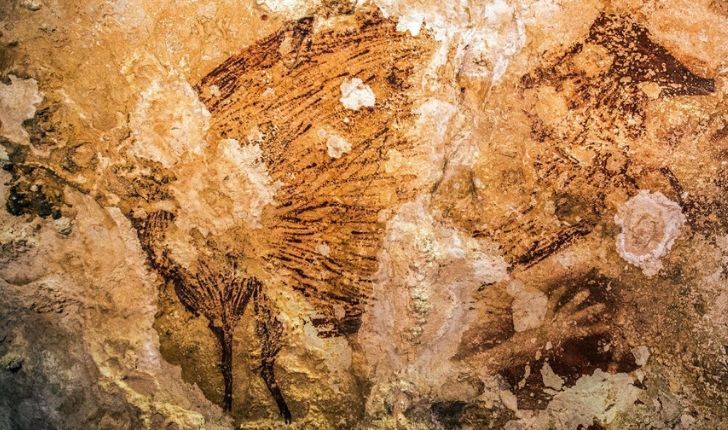 In 2019, scientists discovered a network of cave paintings that are believed to tell a story.

This is the oldest record of storytelling through cave painting that has been discovered and they were found in Indonesia.

The caves are located in the Bantimurung District in Sulawesi, Indonesia and are a natural number of wonderful complex caves.

The cave art found here is estimated to be around 44,000 years old and shows red images of small human like figures hunting animals.

The humans have some animal traits like tails and the animals they are hunting are most likely representing buffalo or wild pigs which are native to the area.

Although this is not the oldest cave drawing on record, it is the oldest evidence of the use of storytelling through cave art.

Cave art can be found all over the world as all humans have a creative side and a want to story tell or document.

The oldest piece of cave art can be found in Altamira, Spain. Although there are other pieces that are still being discovered, the cave art found in Spain has the most evidence to prove it is has the oldest pieces of cave art on record found in the world.

Did you know that there are a total of 400 recognized cave drawing sites that have been discovered in Europe alone?